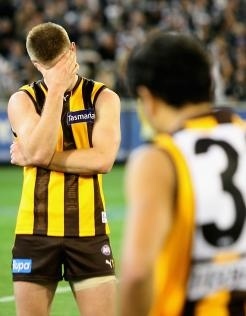 The Hawthorn Hawks were gutted last night, as the Collingwood Magpies stormed home in the final quarter to win a quality AFL Grand Final Qualifying final 68-65 after the Hawks had threatened to win the roller coaster game. The Magpies steadied themselves in the final quarter, while the Hawks struggled to maintain possession and marks.The Hawks had twenty scoring kicks to the Pies 18, but it was most critical in the final quarter, as first Buddy Franklin swopped and kicked a miracle ball for the Hawks to lead with just minutes left, only to see Luke Ball wheel out of a contest to slam the winning goal for Collingwood.