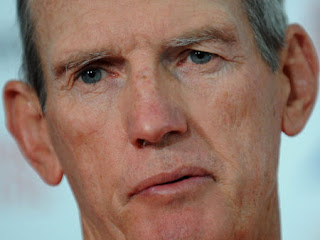 Wayne Bennett officially announced that he has signed a four year deal to coach at Newcastle from 2012. Bennett enjoyed considerable success at the Broncos, and this success at a privately owned club, combined with the vision of Nathan Tinkler, drew Bennett to the Knights.

In doing so, he rejected the offer from Souths Sydney and their owner Russell Crowe. The Souths challenge was huge and ultimately many didn't see how Bennett could change the culture at Souths.


Dragons officials and players  have also admitted their role in Bennetts decision, stating many times that he could expect a frosty relationship with the clubs in coming years, if he was to go to their arch rival.

In other news, Jamal Idris, the Bulldogs sensation has announced that he will be joining the Gold Coast Titans from next year.
Posted by Tony Curl at April 13, 2011