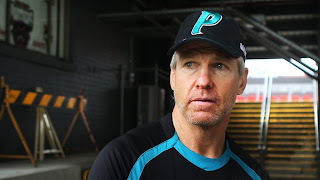 Matt Elliot, the coach sacked by his club the Penrith Panthers for 2012 during the week, appeared on The Footy Show last night and carried himself very well. In the light of the very public posturings about Elliot's future over the last couple of years, Elliot's response was class personified and he kept his own thoughts very private. The chance to unload was strong, but he chose not to and was dignified. His consistent message of personal accountability was very strong, and it is hoped that this man is not lost to our game.

Publicly, everyone is aware that the Panthers are in a lean position financially and that strain on resources meant that Elliot did not have the luxuries that other coaches and clubs have. He was philosophical about that as well, and that he can only play the cards in front of him.

He re-iterated his belief in his playing roster and focusingp forward, knows exactly what he must do for the current season. He expects still to be coaching in October this year.....This man is all class and I certainly take my hat off to him for the way in which he has conducted himself.
Posted by Tony Curl at April 29, 2011