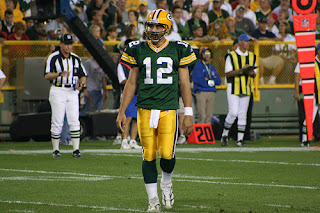 The Green Bay Packers came from 6th seed in the NFC to take the Superbowl 31-25 over the Pittsburgh Steelers. The difference between the teams ultimately proved to be the Packers defence, but even that was a double edged sword. The Packers defence excelled with points from turnovers, but at most time looked vulnerable against the Steelers running game.

Aaron Rogers (pictured) proved to be the big difference, and if his receivers had caught what they should have, the game would never have been in doubt. The Steelers proved how tough they are as a team and never gave up, but it was the Packers that deserved the win and the Vince Lombardi trophy returning to Green Bay.
Posted by Tony Curl at February 07, 2011