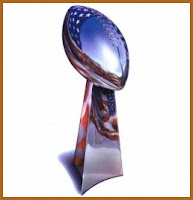 At the end of the Regular Season the Pittsburgh Steelers had a 12-4 record and had won the AFC North title. The Green Bay Packers were 10-6 and came in as a Wild card coming second in the NFC Title. February 7 (Australian Date and Time) sees the two North teams, face off in Super Bowl XLV. The Steelers are always likely, while the Packers had some big wins this season mixed with some close losses.

Post Season has seen the Pakcers take care of Philly, Favorites Atlanta Falcons and last week the Chicago Bears to take the NFC Title.The Steelers played the New York Jets for the AFC title, after knocking over the Ravens.

For what it is worth, I think the Packers may rack up a big score in defeating the Steelers.
Posted by Tony Curl at January 25, 2011