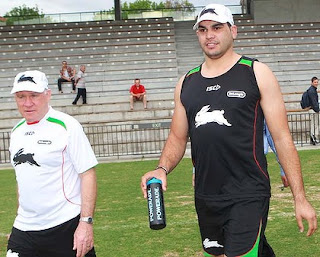 Greg Inglis dominates the news again in the Rugby League World, with news that Souths need to offload three players to fit his contract in under the cap. Mick Crocker, Beau Champion and Ben Lowe have become the sacrificial lambs for Inglis, and to make matters worse, no-one wants them.

The Greg Inglis continuing saga is one that is detrimental to Rugby League as no doubt there will be hysteria surrounding Inglis and his future moves. Some will suggest he will be lost to the game.The only risk of Greg Inglis leaving Rugby League is to swap over to that ultra competitive world of Hot Dog Eating in the good old USA.

He is out of shape, overweight and lacking serious integrity and these would be the major roadblocks to signing anywhere. Greg needs to take responsibility for this mess and deal with it. The other major question, is how this will effect the store who are still waiting to release him. If he cannot sort out the deal, does he still count towards the Storm Salary Cap???
Posted by Tony Curl at December 21, 2010

And Sure as Shooting out come the claims that he is indeed talking to Essendon. http://www.smh.com.au/rugby-league/league-news/no-income-hefty-mortgage--inglis-says-yes-to-talks-with-essendon-20101220-1936k.html

I say good-bye and good luck